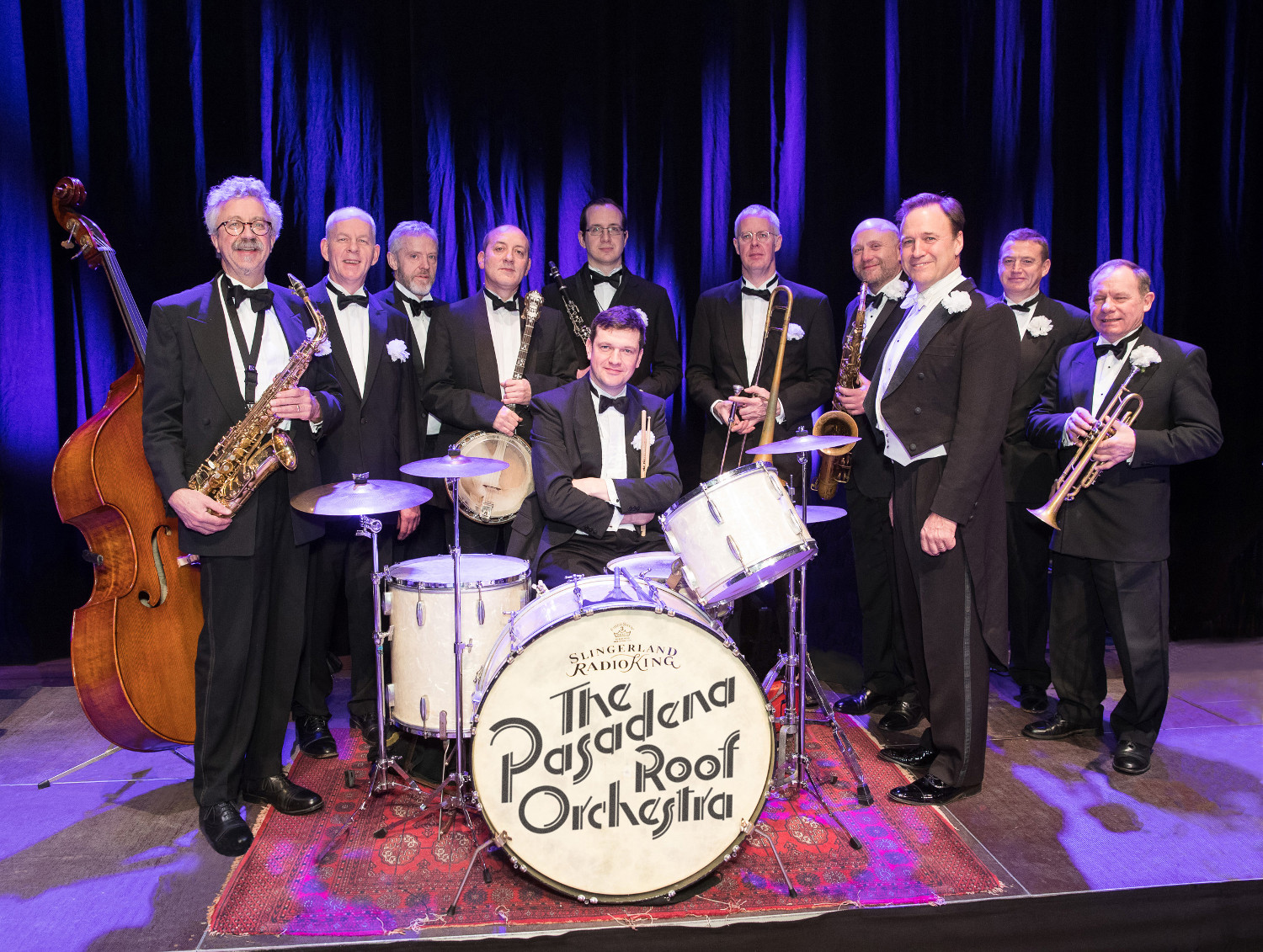 It’s hard to believe that 2019 – 20 is the 50th anniversary of the Pasadena Roof Orchestra. Ever since its formation in 1969, this wonderful, very (despite its’ name), British dance band has been celebrated world-wide, from Hong Kong to the USA to Buckingham Palace.
The orchestra has not had to change its repertoire, these classic hits from the 1920s and 1930s are never played anywhere else in such an authentic and driving style.

As soon as the 11 musicians stride onto the stage, in any theatre or concert hall in the world, you can tell that you are about to witness something special.

1969, the year of the first moon landing, John Arthy acquired for £40 (a large sum of money in those days!) nearly 2000 original dance band arrangements from a widow in Manchester. These arrangements were gathering dust in the attic but were soon to be realised as a treasure trove. These same pieces of music are played almost every evening, placed on the famous music stands adorned with the PRO logo, leafed through by the hands of countless musicians. The Pasadena Roof Orchestra has proved its class, the evidence of which is an ever busier engagement diary, with appearances in Germany, UK, Spain, the Benelux countries, and over 6 tours to the USA.

Whoever is fortunate enough to have a ticket for a show, will experience first-hand the excitement before the start of a performance. The Pasadena Roof Orchestra have brought the music from a bygone era into a vibrant show for the present time. 10 men in Dinner Jackets and carnations play the musical arrangements of yesteryear to the highest level.

Before them, stands the great compere and band leader Duncan Galloway, never short of an anecdote or joke or two. The tunes from the era include such hits as the ‘lullaby of Broadway’, ‘tiger rag’, ‘cheek to cheek’, or Irving Berlin’s evergreen puttin’ on the ritz.
The applause is exactly as loud today as it was in 1969.

This website uses cookies to improve your experience while you navigate through the website. Out of these, the cookies that are categorized as necessary are stored on your browser as they are essential for the working of basic functionalities of the website. We also use third-party cookies that help us analyze and understand how you use this website. These cookies will be stored in your browser only with your consent. You also have the option to opt-out of these cookies. But opting out of some of these cookies may affect your browsing experience.
Necessary Always Enabled

Any cookies that may not be particularly necessary for the website to function and is used specifically to collect user personal data via analytics, ads, other embedded contents are termed as non-necessary cookies. It is mandatory to procure user consent prior to running these cookies on your website.